by Rica
in Bright Ideas by Acuity Brands, Sustainability
6 min read
2
SHARES
Share on LinkedIn Share on FacebookShare on TwitterEmail this Article

This week on the Bright Ideas series presented by Acuity Brands®, Catherine is joined by Eric Gibson, Director of Outdoor Product for Lithonia Lighting®. Eric has been in the industry for more than 30 years, and he discusses what he believes to be one of the most important considerations when designing for outdoor lighting– producing sufficient light where desired, while minimizing the amount of light anywhere else (usually unwanted uplight).

The term “cutoff” first came about specifically in reference to unwanted uplight, with the release of a streetlight in 1932 – the first luminaire of its kind. After its introduction, the Illuminating Engineering Society (IES) coined these three terms by the 1970s: 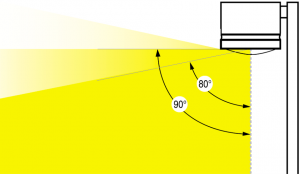 Semi-cutoff allows for twice that amount of uplight: approximately 5% of the light above 90º and 20% between 80º and 90º. Non-cutoff is the catch-all term for any luminaire that doesn’t meet either of those criteria.

After these terms took off in the 1970s, there was a lot of push-back from the community who did not want any uplighting at all.

As a result, they also coined the term “Full Cutoff,” which no longer allowed even that 2.5% of light above 90º in cutoff products. Otherwise, it still allows 10% of the light between 80º and 90º.

While uplight is still as critical a concern now as it was back in the 20th century, it is now described and measured to a far more detailed extent. The IES retired the previous “cutoff” terms back in 2011, and now use the full Luminaire Classification System (LCS).

LCS concerns itself not only with uplight, but also with backlight and high-angle light. The details are described in an Illumination Engineering Society technical memorandum– but in short, it divides each luminaire into 10 zones. There are four zones in the front, four in the back, and two on the upper hemisphere. 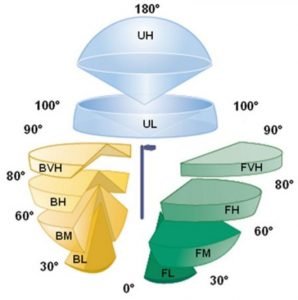 By counting the number of lumens that go into each one of those zones, that will assign the luminaire a BUG rating (backlight, uplight, and glare).

There are four backlight zones, so if a significant amount of lumens go into those four zones, then the fixture will have a high B rating. There are two uplighting zones, so a lot of light going into those two zones will result in a high U rating. Lastly, a lot of light in the forward or backward high-angle zones produce a high G rating.

There are some legislative requirements on B and U ratings worth noting. The B rating is typically limited for luminaires around the perimeter of a property, in those cases where the amount of backlight might actually cause light trespass onto an adjoining property.

The U rating is typically more of a blanket requirement by an entire city or municipality, which may require users not to have any U value greater than zero or two.

While restricting uplight is always a good idea, if that U value gets too strict (such as zero), then it may exclude the use of any particularly historical or decorative post top– which could be problematic for city centers who rely on maintaining a certain look and feel in their towns.

Since the G sector is equated with that high-angle light, outdoor fixtures that don’t want to produce uplight should typically aim to have as low a G rating as possible. That being said, while a low G rating is desirable, there are some trade-offs to that goal.

The best way to get a low G rating is to reduce the number of lumens going into high-angle zones; in other words, reducing the power, and therefore the lumens, of the luminaire. However, reduced power may also call for reduced pole height, which will in turn require the outdoor fixtures to be installed closer together, and thus more units overall will be required to light the space.

Another option to reduce a G rating is to refocus the light from high-angles and drop it down to focus in more of a downward direction. However, redirecting the light like this will create a bright spot underneath the pole, while cutting out the light that would have spread out more. This, again, will call for the poles to be closer together and therefore will require more luminaires. Fortunately, each of these lights will use less power – especially if they are LEDs.

In an indoor environment, any type of uplight generally does a nice job of bouncing off the ceiling, spreading out, reducing shadows, and creating an overall more pleasant space.

Unfortunately, in an outdoor world, things are very different. Any uplight from a fixture simply goes upwards, never to return. If that were the only extent of its waste, then it might not be a problem. However, on its way it will intersect with countless dust and water molecules that will scatter the light to create skyglow.

Anyone who has been on a long road trip at night is probably familiar with skyglow: the halo on the horizon from a town’s lights, long before any of its buildings are visible. Skyglow is essentially the manifestation of light pollution.

While light pollution isn’t as directly harmful to people as say water or air pollution, it can still have a devastating effect on plant and animal life; and present a major inconvenience to some human beings.

A large number of plants and animals owe their growth, breeding, migration patterns, and more to light– so any artificial light people produce may affect their populations.

As for human beings themselves, light pollution largely robs them from their ability to enjoy the night sky. Amateur astronomers can’t see the stars in cities, so they must travel out into distant rural areas to better see the night sky. Giant, professional telescopes in observatories also find it very challenging to see the details that they’re looking for, despite all their advancement and power, if there is too much fog of light present.

FINDING THE RIGHT FIXTURES WITH THE RIGHT RATINGS

Fortunately, when seeking the ideal fixture for an application (especially outdoors), most modern-day products tend to fall into what used to be called cutoff or full-cutoff; and most are also LEDs, which are very small and allow for great detail in lighting optics and directions

In addition to the Illumination Engineering Society, another great resource for lighting fixture requirements and designs is the International Dark Skies (IDA) organization – which focuses on products that may best help to preserve the night sky.

Neither of these groups actually passes any laws in regards to lighting requirements in different areas– rather, that legislation is managed at the local level. Whatever the municipalities create is what the contractors and the designers have to end up working around. While some legislators are very wise to the ways of light, others may be less familiar with its effects or particularities.

So, around 2011 the IES and the ID created a joint task force to create a model lighting ordinance, which is a well-informed ordinance that any municipality can easily adopt as their own. It’s a great way to get rid of obsolete terms like cutoff and full-cutoff in their existing legislation, and bring it up to more modern standards.

All of these efforts can help anybody, from municipalities to engineers to contractors to manufacturers like Lithonia Lighting®, assign light where it is wanted while minimizing its presence wherever it isn’t desirable.

To learn more about outdoor lighting, visit lithonia.com/outdoor. Next week, Eric will return along with Rochelle Rivers of Acuity Brands, to dig further into special considerations for outdoor lighting on coastal properties.

Extending the Life of Existing Capital Through the Use of AMRs