How Manufacturers Can Easily Migrate to Digital Marketing | Episode 91

with Eric Shumway of Circuitronix

This week we got to hear some great stories from Eric Shumway, Vice President of Sales & Marketing at Circuitronix.

Like many other industrial and B2B marketers, Eric was initially skeptical about the adoption of online marketing within their business. However, his opinion has drastically changed since they started seeing tangible results after trying out some new digital tactics.

We asked Eric to walked us through how that happened, and how Circuitronix was able to so easily migrate to digital marketing.

1. RECOGNIZING THE NEED FOR DIGITAL

Eric started to notice that newcomers in their field were getting younger and younger– eventually the same generation as his own son. He knew his own son’s buying and research habits were drastically different from his own.

While Eric’s generation might pick up a Thomas Guide for B2B research, he realized not all young Circuitronix prospects would be doing that.

“What we’re finding is that many of those next-generation engineers are spending a lot more of their effort and their time on the internet. They find their information there.”

Whether it’s Google in the west or AliBaba in the east, search engines are dictating more and more of what researchers find when seeking business solutions.

Deciding that SEO couldn’t be ignored anymore, Circuitronix decided to start building their website and begin dabbling in SEO. 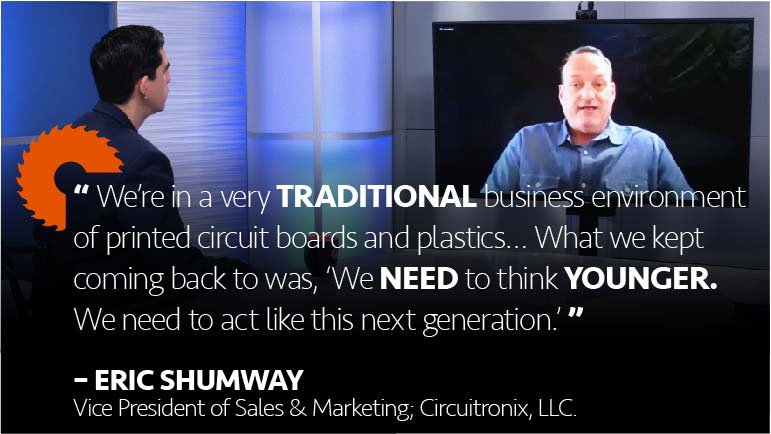 “We’re in a very traditional business environment of printed circuit boards and plastics… What we kept coming back to was, ‘We need to think younger. We need to act like this next generation.’ ”

The initial changes were small (which is definitely what we’d recommend for beginners). Baby steps help companies of any size to easily migrate to digital marketing.

Circutronix’s change was also quite recent. Eric’s team has only been enacting digital in the company for about six months. However, in that time they’ve already seen a measurable change.

2. MEASURING THE FIRST MONTHS OF CHANGE

Circuitronix found particular success with something fairly simple– even juvenile to some adults. They hosted a contest amongst their employees to see who could create the best meme for their company! (Memes are a common staple of social media: images with a comical or snide caption. Certain images repeatedly use the same themes for their captions).

“Within our senior management, there were people that said, ‘Look, that may work for a small company, but that’s not going to work for these big companies that we work with.’ And my comment back was, ‘Why not?’ ”

“Those big companies are made of people. And people respond to the same message, whether it’s a small company or a big company.” 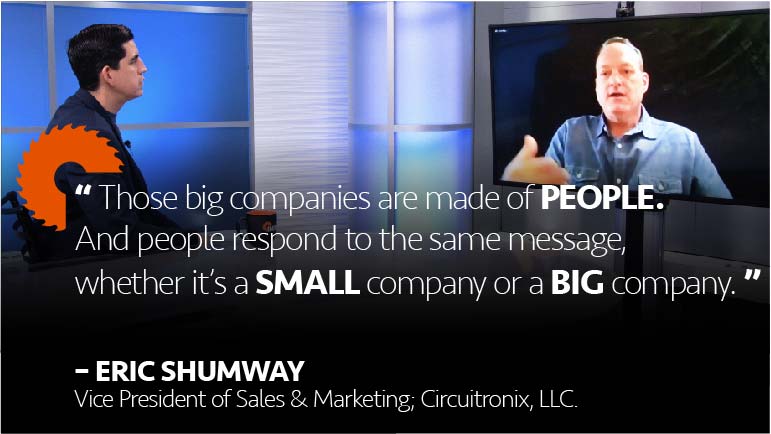 Just expanding the company’s presence on LinkedIn alone has helped to boost engagement by 200%! And tracking those numbers are key to their future plans.

Eric’s goal is to connect the company’s marketing numbers (from engagement to click-through-rates and beyond) to their actual revenues. Proving the ROI from their increased digital activity has been a major staple to gaining organizational buy-in.

The more customers you can prove came from a certain tactic, the more likely your budget for said tactic will increase.

3. SAVING TIME WITH A CRM INTEGRATION

Most of the tracking Eric mentioned has been through an online CRM. Like social media, Circuitronix is still a bit new to this digital tool. However, the tracking programs like Loom, Zoom, and Brainshark are already proving to be highly beneficial.

Circuitronix sales reps can record short video messages for their contacts. Even if they’re sending a contract or other documents, they’ve set up digital tools to help them track engagement with the files they send.

It’s been a game-changer.

“There are other ways. Rather than just generating a quote, tossing it over a fence, and then a day or two later calling and saying, ‘Hey, let’s talk about this!’ We’ve been able to utilize some additional platforms that let us record a short little video and walk someone through a quotation or a presentation and send it to them…It’s all part of that digital marketing platform.

Instead of connecting over the phone or in written text, these videos recreate a face-to-face experience that helps sales reps connect with their prospects at a whole new level.

As with almost any business transition, there’s still a lot of trial and error involved. “In some ways, we’ve learned more what we shouldn’t do,” Eric told us with a chuckle. Eventually they’ll be able to determine best practices for their company with more certainty.

Even then, Circuitronix will need to stay on their toes. Those ideal tactics will probably continue to change over time.

To Eric’s slight surprise, digital tactics haven’t made “the old ways” of marketing and sales obsolete. In fact, quite the opposite.

Tapping into these newer ways of marketing has actually led to an increase in engagement with ‘old-school’ tactics.

Trade shows are a great example. Eric had previously grown to dislike trade shows because they seemed ineffective…but after engaging with customers online and doing digital preparation beforehand, the company is now highly productive at events.

Engaging digitally with leads is like an introduction before the face-to-face interaction ever happens. It makes everyone more comfortable in advance.

That’s why, when manufacturers decide to migrate into digital marketing, they need to be careful not to throw the baby out with the bathwater. “There’s a reason those old tactics worked,” Eric explained to us. 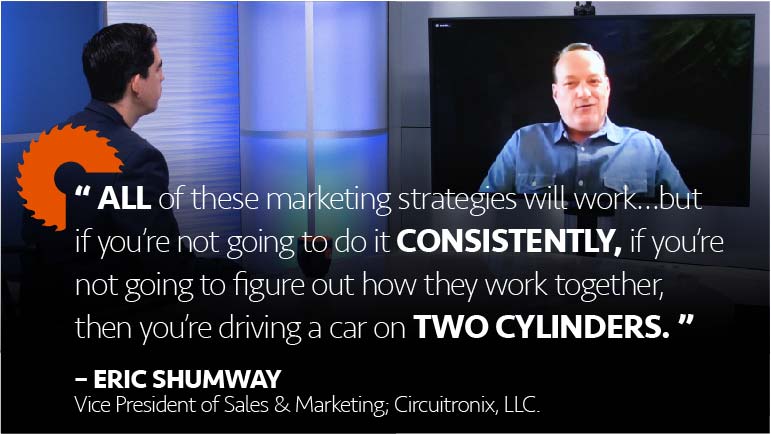 “Yeah, it’ll move and you’ll get somewhere; but it’s not going to be the most efficient way. You’re not going to get where you want to be as fast as you could. It’s when you couple all of these things together that you’re running on eight cylinders. You’re going to move quickly and get exactly where you want to be. But you have to do it all the time. You’ve got to keep putting gas in the car…it’s got to be consistent.”

In short, no single marketing tactic – digital or not– is going to lead to automatic success. It’s a combination of all techniques which deliver.

At only six months into that journey with Circuitronix, Eric is already seeing significant progress. Only time will tell just how exponential their growth can be.

How far has your company come since they decided to migrate to digital marketing into their organization?

Video vs. Plain Text in Emails for Manufacturers