A lot of industrial manufacturers may pooh-pooh social media as a young man’s game. They may call it irrelevant at worst, or expensive at best. But it’s a great hub to build your professional network! Case in point: yet again, social media was the catalyst that introduced us to our show’s latest guest!

Zack Scriven, LinkedIn Influencer and founder of Zack Scriven Media, quit his job a year ago to become a full-time content creator. He started engaging with IndustrialSage content a few months ago, and so IndustrialSage started engaging with his content. This week, we finally get a chance to sit down with him for a one-on-one chat about why B2B manufacturers need to pay attention to social media and become their own influencers.

1. WHAT SETS LINKEDIN APART FROM OTHER SOCIAL MEDIA?

When Henry Ford built the automobile, Zack explained, people would not have asked for an optimized horseless carriage. They would have asked for a faster horse. LinkedIn and other social media platforms are the same kind of unexpected, revolutionary tools.

Now, we can’t imagine life without cars– especially in the United States. Businesses without cars nowadays would never survive. Likewise, “businesses won’t be able to survive if they don’t adopt video and social media,” Zack pointed out. 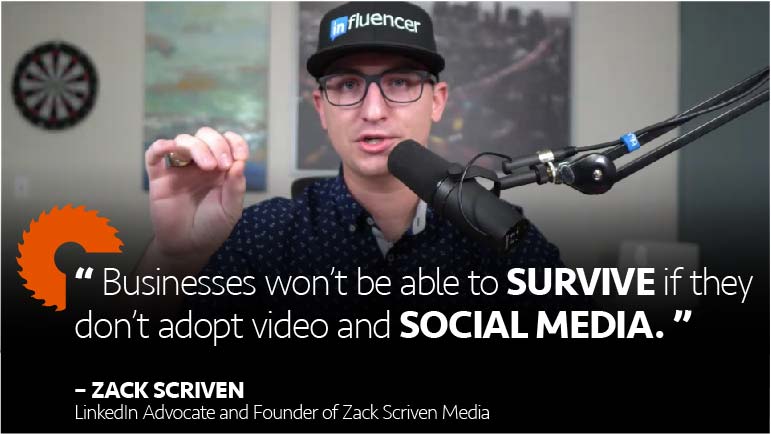 LinkedIn video is one of the most powerful tools available to B2B companies at the moment. It may not stay that way forever, but social media itself has only grown in its influence over the last two decades and it is not going away.

In fact, if you’re not online or on social media, you’re not meeting the expectations of your customers anymore.

“You’re going to be putting yourself at a major disadvantage if you’re not taking advantage of those opportunities to amplify your reach, get your message out, and cultivate those relationships. Your customers are already expecting it.”

LinkedIn is also a hotspot for professionals because it’s a great tool to filter out bad salespeople. You can use the social platform to identify the people that are actually supportive of your activities. Likewise, you can spot the people that only reach out to you when they want something from you.

LinkedIn will show you and your sales tactics for what they are. Are you actually invested in building relationships? Or are you just chasing dollar signs?

Social media influencers developed because of relationships. When our trusted friends recommend a restaurant or a clothing line to us, that’s very significant. We know if they’re sharing it, then it’s worth sharing. We trust their word and their enthusiasm more than any billboards or advertisements we might see anywhere else.

As Zack explained to us, he builds relationships wherever he goes. “I have a personality,” he admitted with a laugh. So, one year ago, he decided to attend the Rockwell Automation Fair. Attendance would be free, and he could travel for almost no cost…but he still had a hotel and meals to pay for.

Zack posted on LinkedIn that he would be filming and talking at the fair. He posted a picture of a blank hat, and offered to get it embroidered with the logos of any sponsors who would send him to the fair.

He would, in essence, be a walking billboard.

Within an hour, two sponsors agreed to pay the small amount to send him to the show. In return, he would harness his natural charisma and promote their companies at the event. Also, any videos he posted on LinkedIn from the event would feature that same hat. 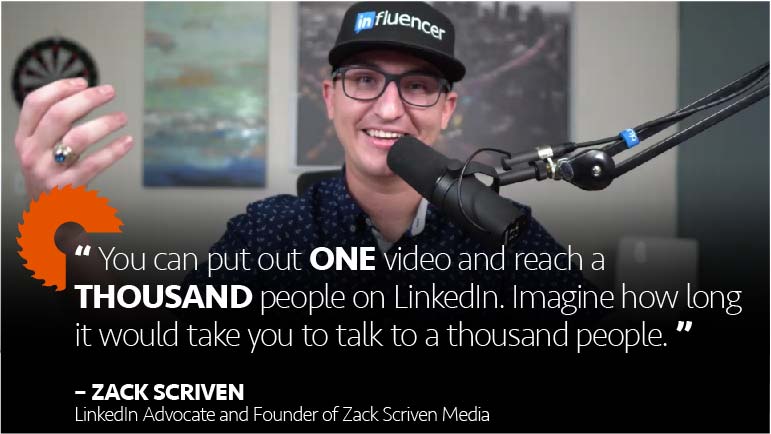 Zack’s work as a content creator is a combination of building relationships and also getting in front of large crowds…both digital and physical. It’s a technique that everyone should be doing to build social media influence for their own business. But how does one combat the worries and self-consciousness that come with the camera?

3. SHOULD SOCIAL MEDIA INFLUENCERS THINK TWICE BEFORE GETTING IN FRONT OF THE CAMERA?

Zack sometimes puts himself in uncomfortable situations in order to become more comfortable in front of a video camera. Nobody’s perfect when they start out, he reminded us.

“Maybe you do a video at the grocery store…if someone’s going to walk by, they might think it’s silly. You’re never going to see that person again. It just does not matter. Focus on your mission.

“Now I can amplify my reach and I can help influence other video content creators within the industry…those are the reasons why I do it. Not because it’s comfortable. You’ve got to know why you want to do it.”

As we’ve discussed previously with Chris Luecke, another content creator, the biggest obstacle to building a personal brand is just quitting before you even start.

But shouldn’t aspiring influencers also be worried about giving away the farm? Shouldn’t businesses keep their trade secrets close to the chest? 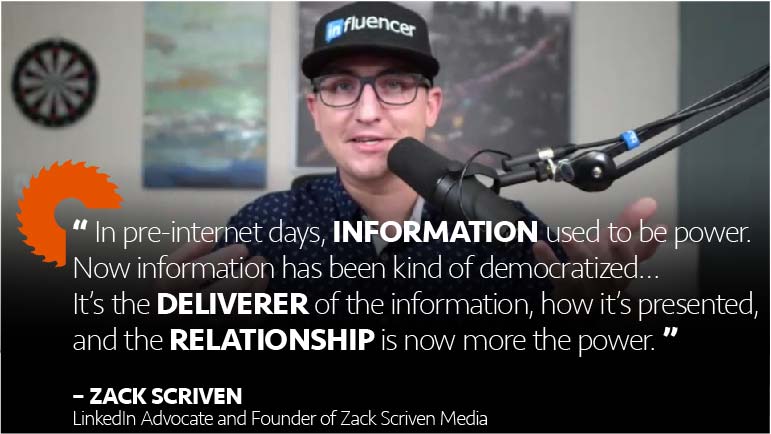 “In pre-internet days, information used to be power. Now information has been kind of democratized… It’s the deliverer of the information, how it’s presented, and the relationship is now more the power. The attention is the currency.”

The internet has spread and shared information so much that, in a way, a lot of what we share is no longer new. Sometimes our videos are merely “preaching to the choir.” Now, however, the speaker is just as important as what is spoken. That’s where the business relationships come in.

A decade ago, Danny and Zack might even be considered competitors of a sort. But the information age has turned them into collaborators.

Is the hype going to last?

LinkedIn Live is a great example of a tool that will burn brightly for B2B companies. But it’s not going to last forever. It will be a great asset for businesses once it becomes publicly available, but in the meantime value is going to come to those who keep pushing out content anyway.

If there’s a particular topic that you’d like for us to talk about, or if you have a particular a challenge that you’d like us to take a crack at, send us an email. We’d be happy to answer them for you. If your topic gets picked for a future episode, you’ll win a free IndustrialSage t-shirt!

DRIVE YOUR SALES EFFORTS WITH VIDEO ANALYTICS (Episode 6 of 6)

Expanding the Boundaries of Pick-to-Light Systems